In 2015 I wrote four arrangements for singer / songwriter Ronald Simone‘s EP Swing Sensation. An eleven piece swing band was the focus of the sound, and I introduced elements of rock n’ roll, country and the big sound of Phil Spector productions like the Righteous Brothers. Ronald was delighted with the result, and asked me take it even further on his next EP.

Arrangement – Who Plays What, and When?

Ronald had the lyrics and vocal melodies for three of the songs. I recorded his guide vocal for each track and wrote the music arrangement around it. To start an arrangement I find the essence of the song. Sometimes it is inspired after the first listen, other times it takes longer.

Ronald’s guide vocal for “My Home” suggested Swing. My best source for swing inspiration is “Sinatra at the Sands”, a live album by Frank Sinatra with the Count Basie Orchestra, arranged by Quincy Jones. I remember being blown away the first time I heard it – the rhythm section has all the power, drive and precision of a heavy rock band, in concert with this wonderfully timeless lyrical music and voice. It is absolutely the best, and I’d recommend it to anyone wondering how swing should be done. While my arrangement has other influences along the lines of Phil Spector, Doo Wop and Gospel, swing is at its heart.

Sometimes a melodic hook comes to mind, a drumbeat or an introduction. Sometimes it’s a genre – with “My Little Girl”, I heard it as a Ska tune right away. The tempo, the vocal phrasing, the lyrics all indicated this. It’s a happy upbeat song with a simple message, just like many of the Ska classics from Millie Small, Bad Manners, Madness.

While I’d heard a good amount of ska, I didn’t have the knowledge of a dedicated rude boy. Musical genres have a tradition which people spend their life immersed in. It’s important to respect this when writing music, otherwise you’ll end up with a pastiche or parody. So I spent quality time immersed in Ska, playing along, bringing the foundations of the music to the forefront of my mind. What are the essential patterns, phrasing, song forms, harmonies, rhythms? It’s always fascinating – have a look at this organ part;

The bass note is omitted from the 3rd beat of each bar, and this is what gives Ska its distinctive lilting beat that makes you want to get up and dance. It’s not necessary to be a slave to these traditions to make great Ska, but it is necessary to be aware of them, they even get in to the dance moves – see the video below!

Another song from the EP “Win Win Win” has a Samba feel, and typically the bassline would be written like this;

A rock or pop bassist might play the first note in each bar stronger than the others, because that’s how it works in rock and pop music, and there it is good. But if they did, it wouldn’t sound like a samba, because in samba bass beat 1 is the weakest, and beat 4 the strongest – the exact opposite.

Ronald had imagined “Win Win Win” with a Latin beat right from the start. The feel that suited the song best was Samba with 3-2 clave. Get this correct and people will want to dance to the song. Get it wrong and they won’t! Here’s a couple of bars of drums and percussion from the tune;

“The Duke” is an instrumental initially released by Rod Howell. The existing arrangement has a lush Eastern influenced melody played on clarinet. Ronald’s band doesn’t have clarinet, so I had to choose another instrument. The obvious choice was saxophone, but I knew there was a better sound, somewhere! The answer came to me in a flash – jazz guitar with reverb, and the melody fitted beautifully into the range of electric guitar. On paper it may seem an unlikely replacement for clarinet, but have a listen, it really works, especially with master guitarist Frank Bolam playing it.

Ronald’s swing band has 3 saxes, 2 trumpets, 1 trombone, guitar, keyboard, bass & drum kit that I used as a starting point for the arrangements. I wanted a bigger horn sound on “The Duke” and “Win Win Win” and arranged extra parts for multitrack layering in the studio. This expanded the horns closer to the classic “Glenn Milller” big band lineup of 5 saxes, 4 trumpets and 4 trombones. I did the same with the rhythm section, arranging extra guitar and percussion parts to most of the songs. Some sampled strings completed the picture, giving a true “wall of sound”. The songs were also to be played live, so I included reduced arrangements that retained the heart of the songs when played by Ronald’s smaller live swing band.

For “My Home” and “My Little Girl”, the rhythm section sound was already rhythmically and melodically powerful, so I arranged for the core core group of six horns. This may sound a lot, especially when you’re in the same room as them, but it can be quite limiting for a big band style orchestration. One of the most significant limitations is having only two trumpets. Even with good musicians. tiny tuning imperfections become noticeable with two instruments playing the same part. For instruments with fixed pitches like guitars or pianos it’s simple – you just ensure they are in tune before recording. But not so for instruments with variable pitch like strings, brass and woodwinds.

One way to address this is to have a single instrument playing that part, but then the volume will be low compared to other instruments, and even when amplified, you won’t have a big band sound. The answer is to have three or more instruments play the part. but we only have two trumpets, so another instrument has to be picked. The trombone might seem like the obvious choice since it is also in the brass family, but if the trumpets are playing in their high range, the trombone won’t even get close in pitch. So I frequently used the alto sax in “My Home”, playing unison where possible, an octave below where not, or as the lower voice in 3-part harmony that would normally have been played by three trumpets, and it made a very satisfactory sound. 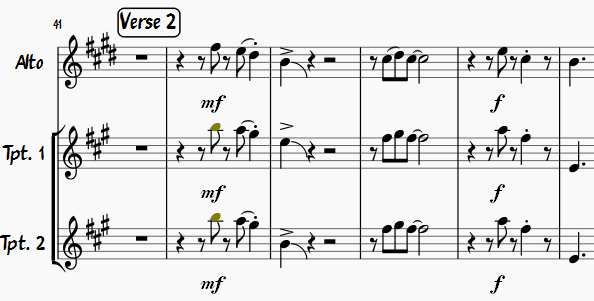 As well as prominent horn parts like this, big band arrangements often have a backing consisting of long, mellow phrases being played at the same time by other horns. Saxophones played softly are an excellent choice for this, but because one of them is being used for the above part, there are only two left! So as well as being too soft, our backing will now likely sound out of tune as well. We’ve just moved the “only two instruments” problem for the brass to the saxes. The answer is to include the trombone in the backing ensemble. For “My Home”, I found it blended most effectively when playing the top line of the three part harmony backing figure, with the tenor and baritone saxes below it; 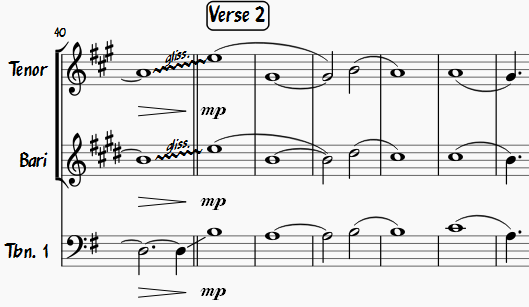 Arranging with this number and variety of instruments was a very rewarding and at times demanding experience. It was sometimes tempting to be complex when a simple approach worked best, but on the other hand, a lot of what initially sounds simple in these arrangements has a lot of depth. I love arranging by the development of intertwining melodic lines, and this instrumentation offered many opportunities to do so.

Sometimes when writing an arrangement you have the opportunity to add a little bit of composition to the songs in sections where no melody has been supplied. Each of the vocal numbers presented this opportunity, and I had a great time writing the intro to “My Home” and the middle section of “My Little Girl”, which still makes me smile even though I’ve heard it hundreds of times. The start of the solo section in “Win Win Win” was based around some improvised scat singing Ronald did on the guide track, and I developed it from there.

From MIDI to Music

I wrote all the instrumental parts in my DAW using real and sampled instruments. This gave a full band demo of each song I sent to Ronald for approval. Once this was given, I transcribed all the parts into music notation for real musicians to play. They did this in several stages, starting with the rhythm section, gradually replacing the virtual instruments with real ones. It was very satisfying for both Ronald and I to hear the music come to life gradually as real, live performances replaced the computer generated ones.

To read more about recording the real instruments please read on to part 2 about the production of the EP.