After his previous swing arranger retired, Ronald Simone set out to find a new one and came across my website. He phoned up and we had a good chat about his music love of the swing sound. A few weeks later he visited my studio with some guitar and vocal demos of his new songs, and asked me to arrange them for his 11 piece swing band to record and play live.

I arranged “How Are You Today” as a classic swinger in the Sinatra way, with some funky twists. Although Ronald’s demos of “Swing Sensation” and “My Dear Friend” were swing influenced, they didn’t completely fit that genre, so with his permission I arranged them a little differently. “Swing Sensation” became a kind of rock ‘n roll jumpin’ jive, something like Louis Prima or the Blues Brothers! It’s a real feel good song with a fun message, and my arrangement emphasizes this. Loads of dynamics, with the opportunity for each instrument to be introduced and “do its turn”, great for audience participation when played live. 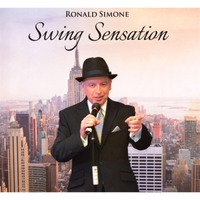 “My Dear Friend” has a deeply sad message about a departed friend in the lyrics, yet I sensed that Ronald intended it to celebrate life as well. So I arranged it in an uplifting way, especially towards the end. Ronald confirmed that this was exactly what he had in mind, and that’s how we recorded it.

“Misty Eyes” is a gentle ballad which Ronald thought would suit a more intimate sound. He was spot on – I did a simple arrangement for acoustic guitar, double bass and percussion that giving an easy listening song that really suits the vocal and lyrics.

The “My Dear Friend”, “Swing Sensation” and “How Are You Today” were recorded by Ronald’s 11 piece swing band at Castle Sound Studios near Edinburgh, with some overdubs and post production at my own studio and Stealth Recording Studio, Glasgow. Ronald was delighted with the work of his new swing arranger, released it as his “Swing Sensation EP”, and vowed to return one day with more songs for me to arrange…