Finding the Sound for Simone

Ronald enjoyed the arrangements I wrote for his Swing Sensation EP so much he employed me as record producer and arranger for his followup EP “Win Win Win”. He asked me to take the sounds he enjoyed from “Swing Sensation” even further, and give the recording a bigger and more modern production.

“Swing Sensation” was recorded by his 11 piece band playing live in the studio. This gives a good traditional sound, but requires disciplined musicians with superb sight reading ability. Organising 11 of these into a large recording studio at the same time is difficult and very expensive.

To counter this, modern recordings are usually made by layering one musician at a time until the song is complete. It’s cheaper and less risky than recording all the musicians at once, and works well for some music, but not swing – the heart of Ronald’s music. A great swing performance comes from the musicians interacting spontaneously, and this just doesn’t happen when you record them one at a time.

My goal as record producer was to get the best of both worlds for Ronald; capture the intensity and excitement of a live recording, but with the massive, tight, clean sound modern studio technology allows – and on a smaller budget than “Swing Sensation”. How was this possible? Read on…

Ronald’s live swing band has 3 saxes, 2 trumpets, 1 trombone, guitar, keyboard, bass & drums, so I wrote the arrangements with this lineup at the core, expanded as required through overdubs. Sometimes I arranged up to 14 horn parts, 2 keyboards, 3 guitars, drums, 3 percussion parts, strings and backing vocals.

Ronald had already recorded the vocal guide tracks in my studio, and I wrote the arrangements around these with software instruments in my DAW, creating a demo of each song. This let Ronald know how the finished songs would sound before recording with real musicians.

After Ronald approved the demos, I transcribed them to music notation for the real musicians. Recall that I wanted to capture the musical interactions of a great band, but without the expense and difficulty of having them all in a large studio at one time? I achieved this by recording one section at a time, starting with the rhythm section. As the rhythm parts were open to some interpretation, interaction and improvisation, it was crucial to record them live as a group. Doing this first allowed their live feel to carry through to the rest of the recording.

To make great music you need great musicians, and the guys I booked for the session were fantastic. Alastair Morrow (drums, percussion) and Frank Bolam (guitar) both played on “Swing Sensation”, and Gino Ciancio (piano/organ) is a magnificent player and character I met on the Scottish jazz scene. They can bring a ton of passion and soul to the music, but doing this with the rest of the band missing would be impossible. To fix this I used the demo made earlier to prepare a “play along” backing track with the missing instruments, allowing Frank, Gino and Alastair to play instinctively without having to second guess what the missing musicians would be playing.

We recorded all four songs in one day at Stealth Recording Studio, Glasgow. Stealth was ideal as they have a drum kit setup ready to record, saving time, and sound engineer Eddie MacArthur really knows his stuff, allowing me as record producer to focus on the music & musicians. We recorded the core rhythm section parts first, then overdubbed additional guitar, percussion and keyboard parts. 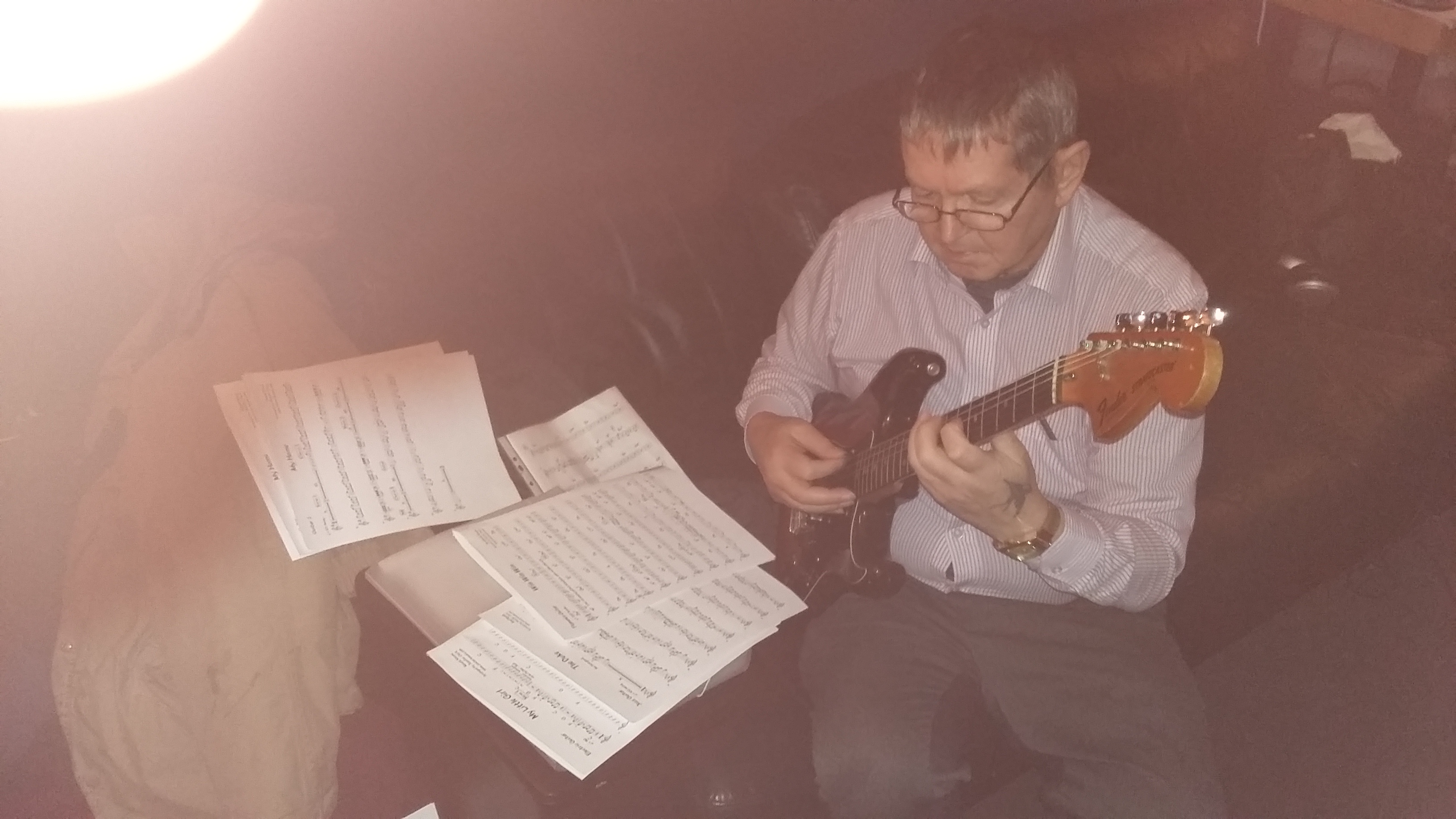 There was a fantastic buzz in the studio that day. I had a sound in mind, and hoped that the musicians would deliver it. These guys did that and more, bringing their own personalities to the music, creating a stunning foundation for Ronald’s songs. 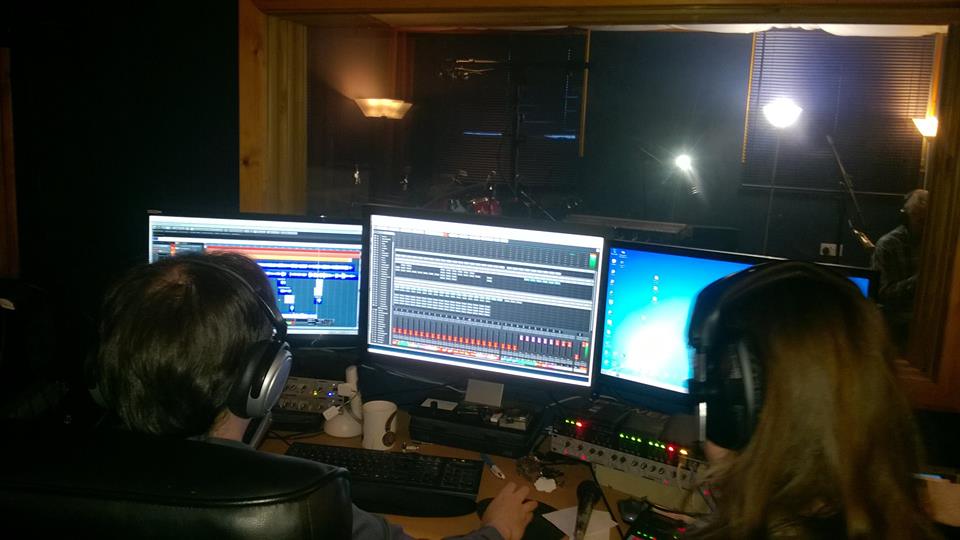 Although Ronald had recorded a guide vocal, last minute inspiration can lead to changes when recording the vocal for real. As the vocal is most important these changes take priority over other top line instruments like horns. Recording the lead vocal before them allows changes to be made to the horns if the old horn arrangement clashes with the new vocal take. Eddie MacArthur is a master at recording vocals, so we went back to Stealth for this, recording all Ronald’s vocal takes in an afternoon session.

With the vocals, drums, guitar, piano and organ beautifully recorded, next up were the horns. These had no improvisation – I had arranged every note – so it wasn’t crucial to record them live as a section. I layered them one by one in my studio, turning 3 players into 14. First was Keith Edwards on Alto, Tenor and Baritone saxes. Keith has great phrasing and is very consistent, an ideal choice to lay the foundation. Have a listen to him playing saxes in the classic big band lineup of 2 altos, 2 tenor and 1 baritone;

Next was Kenny Letham on trombones, in this case adding 2 tenor and 1 bass trombone into the mix;

Before mixing Eddie MacArthur asked me to pan and balance the volume of the horns and their sections. Premixing them this way in my own studio helped speed up the final mix at Stealth Studio. 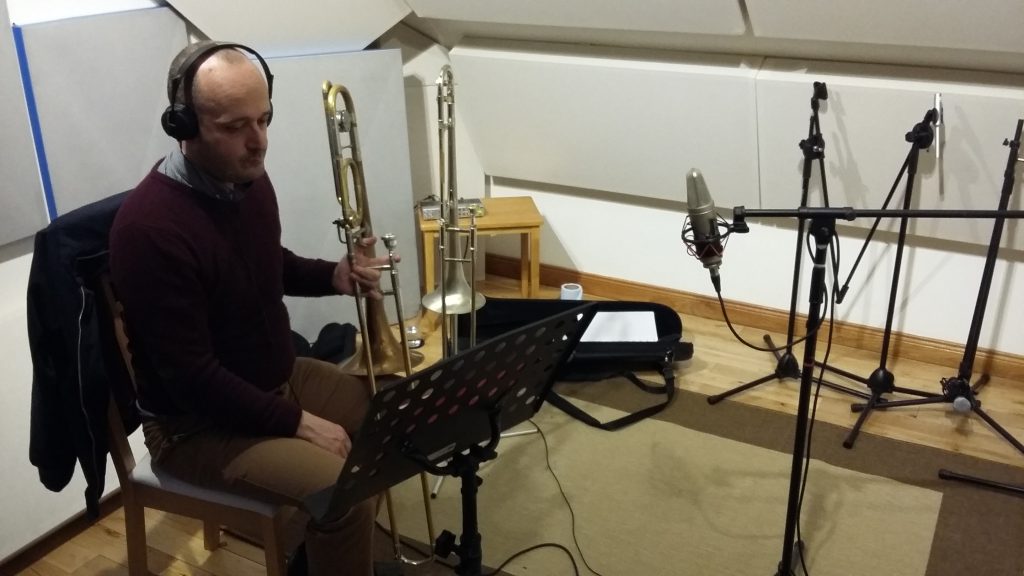 Backing vocals can bring another dimension to a song if done well. And having worked with Chris Judge before, I knew he would sing exceptionally well. He’s great to work with, and after an afternoon’s recording the songs duly had another dimension added to them. Chris is not so much a backing vocalist as a one man choir – hearing is believing, there are 20 of him overdubbed in this clip! 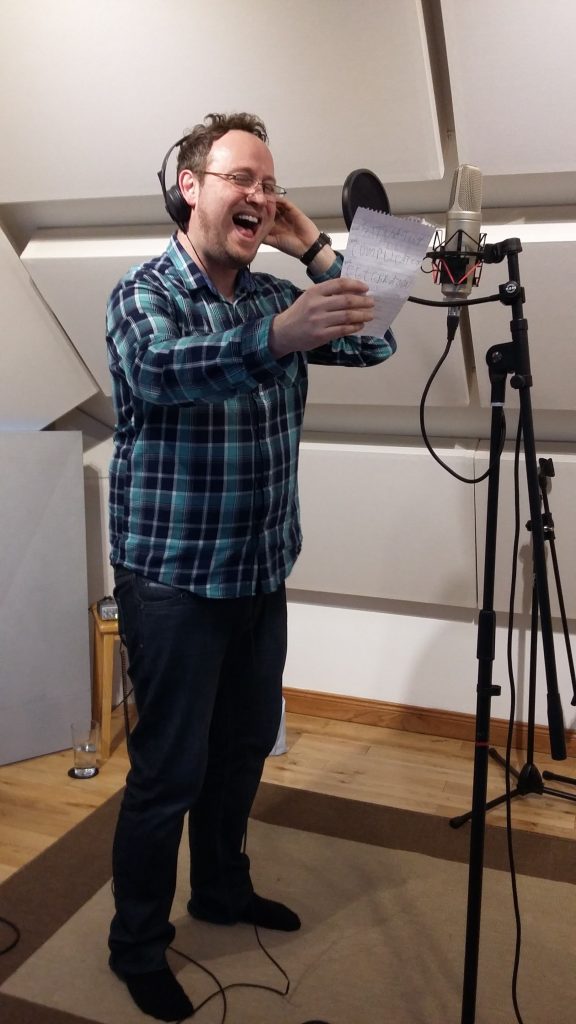 Last to Record – The Bass

Often the bass gets recorded at the start of a project, but sometimes it’s better to do it later. In theory I could have recorded it with the rest of the rhythm section, but as record producer it was crucial to have a wider view of the music then. Playing bass would have taken away from this. I kept things simple for the bass recording. Two of the songs used DI’d bass guitar, and the other two were my double bass mic’d with the Rode NT1000 pointed at the bridge from about a foot away.

Back to Stealth to Mix

With up to 20 backing vocals, 14 horns, drums, bass, several layers of keyboards, guitars and percussion and programmed strings, the track count for each song was huge. I knew it would be best for someone with fresh ears to mix these songs, so went back to Eddie at Stealth, who worked his magic. He did wonderful mixes of all the songs, but of particular note was “My Home”, which he did in 90 minutes – a truly remarkable feat. This screen grab from the mixer on my DAW demonstrates the complexity of his task;

We made four great recordings of four great songs, on time and under budget. Ronald Simone was delighted with the outcome, and said this;

“The arrangements are brilliant, what I imagine is Frank Sinatra listening to a finished recording when Nelson Riddle did the arrangements, everything feels like it was just meant to be there, and you just know, that’s it, we’ve done the business. For me it was worth every penny.”

But don’t just take his word for it, please have a listen and let me know what you think. “Win Win Win” is available from iTune, other popular download sites and Ronald’s website.