Gary Kemp wrote five jazz instrumental tunes, hired 4 musicians for a 1/2 day, and booked my studio for a day to record & mix them. Some sessions take this long just to get the drum sound, so how can it be done? The key is to keep the session simple, correct and flowing.

Gary & I used to gig around Glasgow playing jazz standards and his own compositions, which were always interesting to play – strongly emotional and melodic but with some unusual twists and turns. But due to illness Gary can no longer play to his previously high standard, and his compositions remained unheard for several years. So I was delighted when he proposed recording them in my studio with guitarist Alan Gilbert on guitar, Gordon Paton on saxophones, Charlie on drums and myself on bass guitar.

The best recordings of jazz groups offer a live snapshot of the musicians playing as one, delivering the spontaneity and excitement of a gig, but with higher quality sound than a live environment. In the absence of an audience the musicians must find inspiration within themselves and the rest of the group, and channel it according to the musical moment. When the music is flowing, the room is full of powerful emotional and musical resonances. These are often unique, one-time performances, unlikely to occur again, so it is essential to record them accurately as they happen. From the presence of musical mistakes on jazz classics such as Mile’s Davis “Kind of Blue” album, it’s obvious that overdubs and editing are kept to a minimum.

With only a day to record and mix five songs with a full band, there is little time to obsess about microphone placement. Fortunately my studio has excellent acoustics, so you can place a microphone anywhere and get a good sound. There’s no need to search around for microphone “sweet spots” or worry about room sound getting onto the track, and this allows a quick recording equipment setup.

Rock and pop drumming emphasises the kick and snare drums, but jazz is focused around the cymbals, so I positioned the left and right overhead mics to capture a full stereo sound from the top of the kit, equidistant from the kick and snare drums. The kick and snare mics were used only for reinforcement. The sax mic was placed a few feet away from the saxophone, pointing roughly at the body of the instrument, to give a sweeter tone than close micing. The electric guitar speaker cabinet was close mic’d, and the bass was DI’d. Since everyone was amped up or present acoustically in the same room, no headphone monitoring was required. Gary sat in the middle to direct the session.


*The Behringer ECM8000 is marketed as an omnidirectional room measurement mic, but also works incredibly well in many recording applications. It has a little too much self noise for very sensitive, distant or quiet instrument sources, but drums mic’d at a few feet are none of those things!

The day before the band arrived I planned where each musician would be, setup all the microphones, stands and seats, then made a test recording to ensure everything was working. On session day, once the musicians had arrived and made themselves comfortable it took very little time to move the microphones into place.

My studio measures 5m x 3.5m, so the musicians were quite close to each other, much like a real jazz gig. This facilitated visual communication, essential for cuing sections to each other in improvised music, but resulted in some microphone bleed. Instrument isolation wasn’t a big concern though, as overdubs on recordings of this type should be kept to a minimum, and with careful mic placement it can add to the ambience of the recording. The one exception was a baffle placed behind the sax mic to reduce spill from the drums. 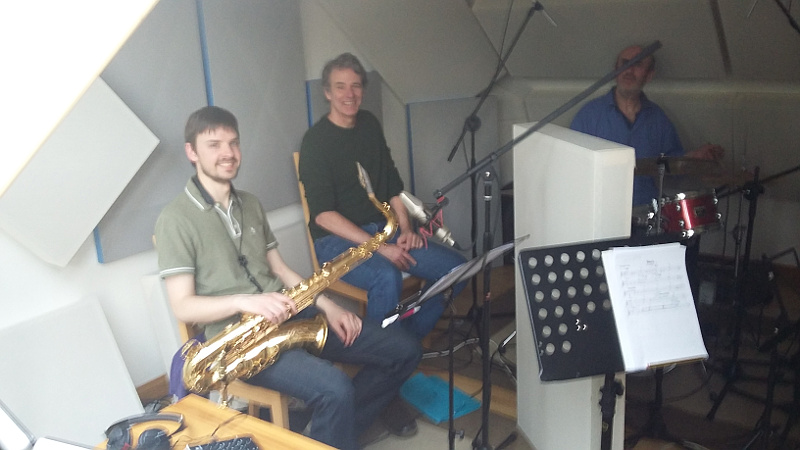 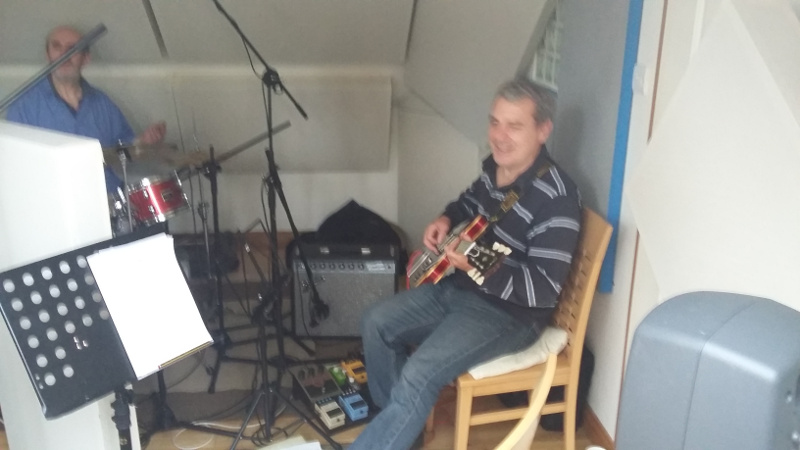 For live combo recording with experienced musicians, I often find that the best takes happen within 5 or 6 recordings of a song. The first couple allow the musicians to learn the feel, form and dynamics of the music. After 3-4 they start to play with play with expression, and there’s a buzz in the room. Take 5 or 6 is usually the keeper. Beyond this, the performances tend to get worse as the musicians become less spontaneous, play by thinking & repetition of previous good ideas rather than instinct, or simply lose focus.

Rock & pop bands benefit from rehearsal before recording, but a large element of jazz is improvised and too much rehearsal will be detrimental, much like going beyond take 6. On the other hand, too little means that by take 6 you won’t have recorded a good take, and by then it’s too late, you’ve run out of time and focus. The best course is to leave that song and move on to the next one, hoping it works out better, which is terrible for morale and wallet. Fortunately Gary did a great job preparing the musicians for this session, emailing everyone leadsheets containing the melody, chords, main soloists and suggestions about form several weeks in advance. While there was no rehearsal, everyone came into the session prepared and knowing what was expected from them. That we had all played together in different bands previously was also a great help.

Time can easily get away from you in a session, so I always plan a timeline in advance, and try to stick to it. It helps retain focus when things are going well, and with damage control when they are not. Keep it realistic, and allow some time for mishaps, otherwise you’ll just feel the pressure of falling behind a too demanding schedule. Based on prior experience, I suggested an hour for initial setup and 45 minutes to record each song, and that is roughly how it turned out;

A few hours after the band left I returned to the studio and mixed the tunes with the amazing live sound we made earlier in the day still fresh in my mind. The performances were good, the recordings high quality, and since I’d kept the recording and DAW setup simple, I was able to get a good balance quickly and sent the mixes of all five tracks to Gary by 9pm that evening.

Have a look at the following screenshot from the Reaper DAW to see the effects used, mostly EQ and compression through IK Multimedia British Channel and Nomad Factory SC-226 Studio Channel. Studio channels allow a speedy workflow when mixing as they allow adjustments to EQ and compression in one window. There was also a bit of reverb from Valhalla Vintage Verb, and the Ampeg module from IK’s Amplitube was used to thicken the bass DI sound. The four drum mics were all recorded on one multichannel track, routed to a stereo overhead channel and separate snare & kick channels in the mixer. This keeps editing simple.

Gary responded the next day with a few suggestions for the mix and a couple of small edits. I was able to do these in a few hours, and he was delighted with the results, as were the band and I. Please have a listen and let me know what you think!