Sheila K Cameron was pleased with the musical & sound contributions I made to her song “Like The Sea Rolling In”, and asked me to enhance another song of hers, “La Bonne Fee”. It’s an original song of hers that had been archived for some time, awaiting the opportunity to come into the world.

Sheila emailed me a stereo mix containing vocal, acoustic guitar and drum machine parts recorded by herself, and asked me to reduce the volume of the drum machine relative to the other instruments. As there were no multitracks available, this was quite tricky with the instruments already mixed together. A noise reduction filter trained to see the drum samples as noise help quite a bit. I also used mid/side mastering techniques to remove some of the room sound from her recording, allowing the instruments she recorded to blend more easily the real and virtual instruments I added later.

When it comes to music production, Sheila emphasises a philosophy of “Mair Depth and Nae Fancy bits”, and she is quite right! So I started with the rhythm section, adding the most obvious missing element, a bass guitar. I used my Fender Precision clone for its fat round tone, and established a good groove. Some hand claps lifted the chorus and added to the groovy feel, with cello and dark piano adding depth. The backbone of the song was in place. 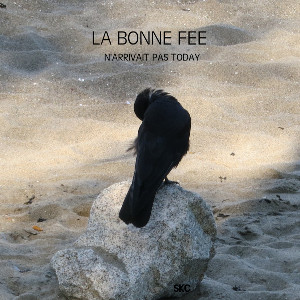 The song tells us that the “La Bonne Fee n’arrivait pas today” – “The good fairy didn’t come today”. So this fairy isn’t really good, in fact she may be downright mischievous, or perhaps even a bit on the dark side, and I wanted to bring this aspect of the song out. A catchy, teasing hook on some echoing bells was just the ticket. And since there is French in the song, it would be rude not to have accordion – and so another hook did arrive in the chorus!

The music for the middle eight “La La La La” section didn’t come to me immediately… it was a case of having to look sideways from something to get directly to its heart, and that’s what happened here. The dark cello arpeggios and jumpy bass guitar seem unlikely candidates, but they provide just the contrast with the rest of the song that sets this break section apart. I look forward to hearing this part every time I listen to the song.

I created a rough mix of the song and emailed it to Sheila. The new arrangement inspired Sheila to suggest some changes to the form of the intro and outro, we added some depth in the verses with ensemble cellos, and I did a final mix.

Every time I listen to this song it makes me smile, and the cello variation at the end of the last chorus gives me the chills. I like it, a lot!